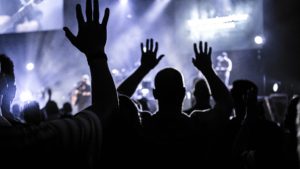 Brace yourself for a story of miraculous proportions…

On the night of Saturday, August 13, 2016, I attended a church that delivered a powerful message of biblical justice for the oppressed and how women are under attack from Satan. At the end of the service, without hint or preview, Facebook Private Messenger decided to reveal messages that were undelivered, dating back three years, one year, six months, and three months. I never saw this screen before or since on my smart phone. It quickly disappeared and I could not get it back. While recognizing some of the senders, I was suddenly concerned about conversations that others were attempting to have with me and that they probably thought I did not care.

Knowing that apps and websites can look drastically different on a mobile device versus a laptop, I logged-on when I got home. I was able to locate this hidden screen and discovered two dozen messages. Many were unimportant, but one clearly stood out. It was a response to a message that I sent six months prior, on a Facebook Page, in February 2016. The conversation was from Philadelphia-based Do What’s Wright Production Company, LLC. They had been filming a documentary throughout Pennsylvania focusing on statewide anti-human trafficking efforts and the history of abolitionism concerning slavery. I offered to help and asked how I could be involved should they come to Pittsburgh. At that time, I thought my message was either being ignored or forgotten, so I was disappointed.

As it turns out, the producer responded right away and accepted the assistance. However, now I am reading this for the first time, six months later. I responded with an apology for the half-year delay and tried to explain what seemed inexplicable. Since she also gave her email address in the message, I doubled my efforts to reach out. This documentary could easily have been in post-production by now and I feared that I might have missed an incredible opportunity.

However, two days later, the associate producer of ‘From Liberty to Captivity’ responded and assured that this was no coincidence. You see, just this week, the filmmakers were going to start calling contacts in Western PA to schedule appointments.

Let’s take a step back for a moment. A conversation that I initiated was lost for a period of six months, then it “just happened” to appear at a perfectly timed moment which was literally the best week possible.

The next miraculous occurrence: she described a major gap that they had regarding content. She said that they did not have anyone to report on outreach in the hospitality industry, as related to sex trafficking.

Wait a minute. For the past two years, I had led a hotel/motel ministry that brought awareness of warning signs and resources to take action for front desk staff and managers. The team had been to 130 hotels and motels from Pittsburgh, Erie, Harrisburg, New York City, Washington, D.C., Chicago, Los Angeles, etc.

Furthermore, I had recently trained a church group of 6-10 in Philadelphia to mirror these outreach efforts.

Next, she referenced advocates in the Pittsburgh area that she was trying to reach without much success. One-by-one I began to close the gaps with my local network of faith-based, law enforcement, and clinical contacts. I was becoming somewhat of a consultant for the film.

If that is not enough evidence for you that this was a divine appointment, I suggested a regional event that should be of interest to them. The Imagine Conference focuses on the most vulnerable population of children that are at the highest risk of being trafficked; which is those that need mentored, sponsored, fostered, and adopted. The year before, I spoke during a segment representing the plague and battle of domestic minor sex trafficking. After I explained that the event would be held on October 22, 2016, she said that is THE WEEK that production was planning on relocating to Pittsburgh! Progress moved swiftly and with few obstacles, from filming locations to interviews of courageous survivors, former traffickers, and local advocates. Exactly what they were seeking is what I had been prepared to provide.

With continued collaboration, I was told that I no longer was going to be a subject interviewed for the film. Rather, I was being tapped to be Assistant Producer. (Perhaps, I edged myself out by finding way more interesting people than myself to interview, but who cares!)

To give a little more personal context: the year 2016 was extremely difficult. Within the first six months of the year, I 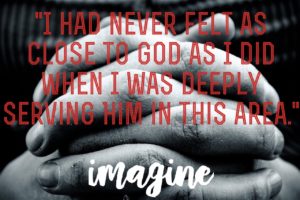 grieved for the loss of two very close family members and experienced spousal job loss. Probably somewhere around early to mid-summer, I was longing for another sign from God that I was on the right path by fighting human trafficking, as I was starting to become a little stagnant. All I knew was, I had never felt as close to God as I did when I was deeply serving Him in this area. Defining moments have been instituting the hotel/motel ministry; lobbying for International Justice Mission on Capitol Hill; making an awareness video through my church; and speaking at the Imagine Conference before 400 attendees. I was ready for the next level.

The two Sundays after the second family death, I was at my home church and acutely engaged with the worship. Suddenly I heard God’s audible voice-as audible as it could be while in my head-say, “Trust me. You won’t believe what I have for you.” I literally heard this message and cannot even type it without tears. I had this divine experience on Sunday, July 31st and again on Sunday, August 7th. The following Saturday, August 13th the archived/lost Facebook Private Messenger messages popped-up, which guided me to the six-month old correspondence, and becoming Assistant Producer on ‘From Liberty to Captivity’. I do not tell this story to say – “Hey look at me!” Make no mistake; I am ecstatic as this marries my lifelong passion of film and compassion for victims/survivors of human trafficking.

I am telling this story as a real-life illustration of God’s perfect timing and divine intervention.

This is something beyond our understanding. If God knows all things, can be all places, and is all-powerful, He certainly can control something like our electronic devices. There is no way this is a coincidence, by happenstance, or irony. This can only be explained as the movement of God.

He has orchestrated this to the point of it being undeniable. He has been preparing this opportunity for years. I just had to learn to listen to God’s heart for justice.

Learn more, and get involved in supporting “From Liberty to Captivity”

Written by Gary Caldwell, Assistant Producer of ‘From Liberty to Captivity’ film