From Liberty to Captivity is a film created to awaken people to the pervasive reality of sex trafficking in Pennsylvania and to awaken seeds of hope, inspiring them to carry forth the legacy of the abolitionist who came before them, fighting for freedom and rewriting America’s history.

Join us on January 26 at 7pm at North Way Christian Community in Wexford, during Human Trafficking Awareness Month, for a FREE screening of this award-winning film, hosted by the Justice Team at North Way. No registration is required.

Get more info about the event on Facebook or North Way’s event page, and view the trailer here.

Keep reading for Brooke Brennan’s personal story about how this film impacted her life!

Human sex trafficking was a foreign concept to me up until two years ago.

Like most people, I was vaguely aware but thought it only occurred in other countries – not here in the United States and certainly not in my hometown. In the fall of 2017, I was at my church Sunday school when two women came to speak on the prevalence of sex trafficking in Pennsylvania, what they were doing to help victims in the area recover from years of abuse, and how they were working to combat this crime in nearby areas like Lancaster. I remember being moved by the presentation but ultimately horrified by the content and didn’t want to get involved – “Definitely not my calling,” I thought. 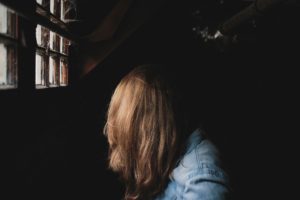 Around this time, I was starting to learn more about my aunt’s involvement with the creation of a documentary about sex trafficking in Pennsylvania called, From Liberty to Captivity, which these women had mentioned, but I thought of this recurrence as mere coincidence and quickly shied away from those conversations. It wasn’t long after that Sunday that my aunt asked if I would volunteer as an extra for the film, and I actually agreed to go but only because it sounded cool to be behind the scenes of a movie. From then, I was presented with more ways to get involved with the film, but the thought of immersing myself deeper into this world was still frightening, so I declined. Months later, I happened to be at my aunt’s for dinner one night when I overheard a call she was having about the film – they were looking for someone with experience in PR, marketing, and social media to join the team, which was my prior work background and college degree. I was intrigued. “Perhaps more than coincidence,” I thought but was still too afraid of the topic itself to commit. That same month, my aunt needed another set of eyes editing the film and, for the first time, I sat down and watched.

At this point in my life, I had been eagerly seeking my own purpose and waiting on God to reveal to me how I could be using the gifts, skills, and free time He had blessed me with to build a ministry. Never in a million years did I think I would agree to be in the fight against sex trafficking, but I knew that it is what God had planned for me before we even finished the documentary. There is a moment in the beginning of the film when an interviewee quotes Psalm 94:16: “Who will rise up for me against the wicked? Who will take a stand for me against evil doers?” And, much like this person experienced, God gripped my heart. At the end, I – like any viewer – was now responsible to answer one unavoidable question… what was I going to do to help end modern-day slavery?

What was I going to do to help end modern-day slavery? -Brooke Brennan. Watch @FromLibToCap to find out how you can get involved in fighting human trafficking. #humantrafficking #antitrafficking #modernslavery #fromlibertytocaptivity Click To Tweet 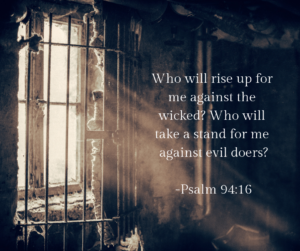 From Liberty to Captivity is not just a documentary about the reality of human sex trafficking in Pennsylvania – it is that, and no doubt alarming to learn from victims, police officials, doctors, activists, ex-traffickers, educators, leaders and experts throughout the state about the stories and places where children and adults are being brutalized, tortured, controlled, drugged, and sold for sex every hour of the day. But it is also a call to action. Woven into the film is a sobering reminder of a time not long ago when slavery existed in Pennsylvania, the efforts it took to end such evil, and the disturbing fact that in 2019 it is still alive and well in America. The historical context of slavery in the film was especially compelling to me, and I was truly inspired to learn from people like the Quakers and other abolitionists throughout time who felt a moral obligation and made it their mission, even at the risk of their own lives, to defend and free the oppressed. As mentioned in the film, Frederick Douglass warned in his speech the day after the passage of the Thirteenth Amendment abolishing slavery by Congress that slavery “has been called by a great many names, and it will call itself by yet another name; and you and I and all of us had better wait and see what new form this old monster will assume.”

Whether you want to expose yourself to the hidden reality of sex trafficking in Pennsylvania or not, the fact remains, we as humans should feel compelled to care for the well-being of one another, and as citizens of this great country should fight to defend the “liberty and justice for all.” I would encourage you to open your heart and mind to this issue by seeing the film on January 26 at 7pm at North Way Christian Community in Wexford. If someone like me can go from being completely closed off to absolutely sold out on the fight to end human sex trafficking and a member of the From Liberty to Captivity team, what does that mean for you?

Brook Brennan joined the From Liberty to Captivity team in 2018 as a volunteer assistant producer, helping with a myriad of administrative tasks for the completion of the film. Post-production, her role has evolved to include strategic planning and executing of screening events, as well as efforts surrounding the film’s marketing, public relations, and social media. Outside of the film, Brooke has held a job as a nanny for the past few years and has served as a nursery staff volunteer at Church of the Savior in Wayne, PA. Brooke grew up and currently resides in the suburbs of Philadelphia, PA. She graduated from Longwood University with a Bachelor’s degree in Communications and Public Relations and is grateful to be able to use her skill sets with the intent to help end human sex trafficking in PA and beyond.