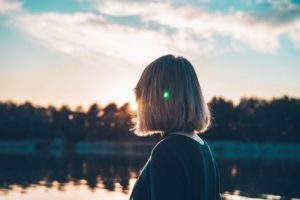 Imagine you bought yourself a new watch. It works so perfectly (and looks so good on your gorgeous wrist) that you decide to buy yourself a fancy shirt to go with it. Then, you talk yourself into buying a whole new outfit (because you have worked so hard recently and you deserve to treat yourself).

And you feel amazing.

But while you’re out for a stroll around the lake (looking like a million bucks) you see a young girl drowning. You can tell that she’s exhausted… seconds from going under.

Tell me, what would you do?

You would immediately jump into the water and save the young girl’s life! Your cool watch, your fancy shirt and your new shoes would probably get ruined.

But that wouldn’t matter.

Not even for a second.

You would be the hero who saves that girl’s life; because if you were in the right place, at the right time, you would do the right thing.

Now let me interrupt this random conversation with a huge FYI: if you earn the typical income in the US, and donate 10% of your earnings each year to the Against Malaria Foundation you’ll probably save dozens of lives over your lifetime.

Between now and the day you die.

Tell me now, what are you going to do?

Sitting on a throne, dressed in white, watching humanity destroy itself.

And so he jumps. Well, in more Biblical language, “though he was in the form of God, he did not count equality with God a thing to be grasped, but emptied himself, taking the form of a servant, being born in the likeness of men. And being found in human form, he humbled himself by becoming obedient to the point of death, even death on a cross.” Philippians 2:6-8

That’s really good news for us.

But it is also an invitation to surrender.

Jesus left his privilege for the sake of the under privilege.

Jesus left his privilege for the sake of the under privilege. And now, it’s our turn. -@HappySonship Click To Tweet

In 2009 I went to the Republic of Niger and spent a week in sub-Sahara bush. This area is among the poorest regions in the whole world. We went to share the love of God and assist a local ministry. We did everything from feeding children, to handing out multivitamins, sharing the stories of Jesus with our Muslim friends and praying for the sick. While we were there in a remote village, we heard of a young man who had died from a common cold.

And then I literally lost it.

I got into the car and began to cry uncontrollably. Our team had spent eight hours under a tree in 100+ heat, trying to smile for the long line of malnourished people who waited for food, Jesus and medicine. I cried because I was angry at my own selfishness. I cried with disappointment because God had not sorted out the famine. I cried because a man had died from a common cold.

This summer, I moved with whole family to Puerto Rico.

Two powerful hurricanes decimated the island last fall. And for the last 10+ months I have been flying in and out, with multiple teams, from multiple churches, loving the people of the Caribbean with words and action.

And action is the key word here.

Trust me, I’m not talking about becoming “saviors” on the spiritual high of good deeds.

Neither am I talking about salvation via works, or trying to earn God’s love.

This is not about things we HAVE do. This is about the things we GET to do.

You my dear reader have been fully empowered to change the world.

*And God save me from just trying to hype you up! 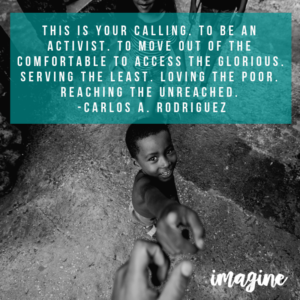 This is your calling. To be an activist. To move out of the comfortable to access the glorious.

Serving the least. Loving the poor. Reaching the unreached.

But I’ll tell you that story at the conference.

I’ll leave you with this.

Notice that Jesus listed out some of the “drowning” in front of us (and even claimed himself to be one with them).

Yes, social media is exposing us to unimaginable pain, natural disasters, never-ending wars and “drowning girls” all around the world. And I know you’ve heard what the right thing to do is. But every once in a while, we all need a reminder to go ahead and do it.

So here’s your reminder.

Jump in the water.

Carlos A. Rodriguez is a pastor, an activist, a communicator, a provocative preacher, and the keynote speaker at Imagine 2018. He’s the CEO of The Happy NPO and the author of Simply Sonship, Drop The Stones and the upcoming Proximity. Together with his wife, Catherine, they have three children and have recently moved to Puerto Rico to continue hurricane relief efforts all over the Caribbean. Find out more about their work at happysonship.com