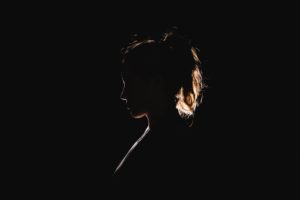 January is Human Trafficking Awareness Month: Here’s What You Can Do, Pittsburgh

Get your clicking finger ready: It’s time to test that “fake news IQ” you’ve spent the past year developing. Sure, you can spot a click-bait headline a mile away—“Joanna Gaines is Leaving ‘Fixer Upper’ to Become a Scuba Diving Instructor!”—but can you figure out what’s missing from the following real-news headlines? Hint: It has to do with where they happened. Go ahead and Google them; I’ll wait.

Give up? Here are the answers:

Human trafficking larger problem in Western Pa than many believe

Shocking, huh? These are from just the past three months.

What and Where is Human Trafficking?

Human trafficking is modern-day slavery. According to antislavery.org, it involves transporting, recruiting, or harboring people for the purpose of exploitation (this could be either commercial sex or labor exploitation), through the use of violence, threats, or coercion. Any minor under the age of 18 who is induced to perform commercial sex acts is a victim of human trafficking, regardless of whether he or she is forced or coerced.

It’s a common misconception that slavery was abolished in the 19th century; in fact, more people are enslaved worldwide today than at any other time in human history—as many as 40 million women, children, and men according to some estimates. 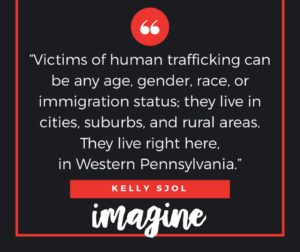 And slavery does not happen only overseas, in developing countries. As the headlines above indicate, it hits much closer to home. Victims of human trafficking can be any age, gender, race, or immigration status; they live in cities, suburbs, and rural areas. They live right here, in Western Pennsylvania.

While human trafficking was virtually nonexistent in our region just six years ago, since then, 36 known brothels, or places of human trafficking, have sprung up in the greater Pittsburgh area. Six of these trafficking dens are in the suburbs and surrounding neighborhoods.

Their Response: Not Good Enough

Now that we know human trafficking is happening here, naturally we want to know what is being done to address it.
Thankfully, Pennsylvania has made great strides in just the past three years. The Commonwealth enacted Act 105 in 2014 to define human trafficking and give law enforcement tools needed to go after traffickers. Since 2011, Pennsylvania has gone from an “F” to a “B” grade on its state report card released by Shared Hope International’s Center for Law and Policy, which measures comprehensive response to domestic minor sex trafficking.

Unfortunately, there is still much progress to be made in this fight. Presently, Pennsylvania’s “trafficking in individuals” law does not prohibit a defense based on the willingness of a minor to engage in the commercial sex act. Prostitution laws apply to minors under 18. This means kids who in many cases have already been abused by family members as well as pimps are victims a second time when they are treated like the criminals and arrested on such charges as prostitution, drug possession, loitering, and other prostitution-related offenses. Meanwhile their traffickers are rarely caught, let alone prosecuted and convicted. A Senate bill to address this, known as Safe Harbor in Human Trafficking, was introduced as SB554 and passed to the state judiciary in April 2017.

Additionally, Pennsylvania has only a five-year statute of limitation from the date of the crime during which a victim may speak out against his or her trafficker and is extremely lenient when it comes to regulating “adult-oriented businesses” like strip clubs, massage parlors, and other adult establishments. A House bill to regulate the latter was pulled in 2015. Learn more here.

To put it plainly: Our state government is not doing enough to equip law enforcement to protect some of our most vulnerable citizens.

But you can do something. Want to get involved? Read on.

Your Response: Start from Where You Are

Knowledge is power, and in the case of human trafficking, it is light. Traffickers work in the shadows—their success depends on your not knowing about or noticing them, not seeing their victims. By far, your knowledge about this subject and the fact that it is happening all around us is the most important weapon you have, as it will shine light on this dark injustice by exposing it for the evil it is.

1. Learn
Educate yourself and learn about indicators of trafficking as well as what to do if you suspect it is happening by exploring the links above, as well as national organizations like Polaris Project and Shared Hope. Local resources for education, prevention, and response include Living in Liberty (an organization that operates safe houses for survivors of trafficking) and Project to End Human Trafficking. Want to better understand this issue from the perspective of a local survivor? This is a great article. 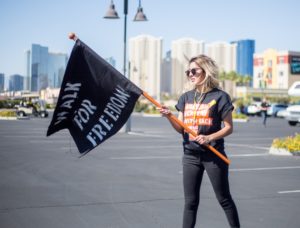 As you might imagine, there are many incredible organizations out there that are doing lifesaving work in the fight against human trafficking. If you’ve read up on what trafficking is and feel led to give financially, the list of organizations that participate in Imagine Conference as exhibitors is a great place to start!

This month, in honor of National Slavery and Human Trafficking Awareness and Prevention Month, why not take the first step and get involved? You don’t have to be a lawyer, doctor, caseworker, counselor, or pastor to make a difference. You don’t have to start your own foundation, nonprofit, or ministry—they already exist right here in the Pittsburgh area, and they need you. So start from where you are.

Join the Justice Team. A ministry of North Way Christian Community, the Justice Team is dedicated to raising awareness about the plight of the vulnerable and oppressed, including victims of human trafficking, and provides opportunities for both its members and the larger church body to volunteer and engage in ways to serve with local churches and agencies. Meetings are once a month, typically the third Sunday, at 4 p.m. at Repurposed thrift store (7805 McKnight Rd, Pittsburgh, PA 15237). The next one is January 21. Email justice@northway.org for more info.

Donate your used clothing and household goods. Speaking of Repurposed thrift store, you’ve probably passed it a thousand times, but did you know it directly supports the work and ministry of Living in Liberty? There’s a Repurposed for Kids too! After you’ve donated your stuff, shop! And tell others to donate and shop!

Volunteer with Repurposed and/or Living in Liberty.

Attend an upcoming event. Email justice@northway.org to join the email list and receive information about events.

Finally, do whatever you can with whatever you have wherever you are to raise awareness and shine more light. A mom friend of mine recently told me this story. She was out with her husband in the suburbs of Pittsburgh when she noticed an ad taped to a pole for a “modeling job” and no company name or location, just a phone number. Because she was informed, she knew it was likely false. When her attempts to tear the ad down failed, she ran into a drug store, purchased an enormous permanent marker, and used it to write all over the ad, warning potential victims. She now carries that marker with her like a weapon, ready for her next opportunity to fight back!

We are all in this together, and together, we can end this!

Written by Kelly Sjol
When she’s not being wife to a great guy, mom to two silly girls, or marketing consultant to universities and has free time (which is almost never), Kelly Sjol blogs at wearemadefree.com.